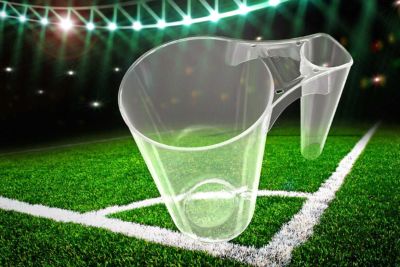 Cup Concept – sales partner and subsidiary of Fries Kunststofftechnik GmbH for returnable plastic cups wins the 2014 German Reusable Innovation Award for its ‘ARENA CUP’, which was developed by Fries and produced in Sulz. The award was presented by Deutsche Umwelthilfe in Berlin on April 2, 2014.

The ‘ARENA CUP’ minimizes risk when cups are thrown at large events. The edges of the cup are rounded down and, if thrown, it empties itself out in a matter of seconds, as it’s the remaining contents of the cup that are a significant cause of injury. With the she safety-enhanced Arena Cup, returnable cups meet the highest safety requirements at major events. This makes the returnable concept a safe bet – for organizers and visitors. www.cupconcept.de