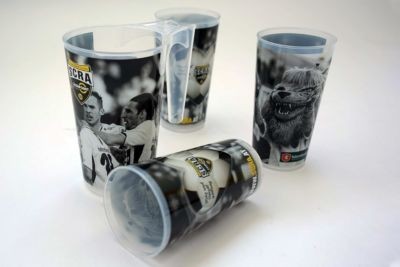 Produced in our head office in Sulz and sold by Cup Concept, Sexau, the ARENA CUP reusable cup has been used in the Altach Bundesliga stadium since 2016. The SCRA fans have reason to be pleased because the stackable handle means they can hold up to five cups in one hand. Thanks to the use of the in-mould labelling process, the ARENA CUP is scratchproof and its colour withstands frequent washing. Using reusable cups also means doing your bit for the environment. Thanks to its special geometry, the safety-optimised and break-proof stadium cup lets go of any liquids mid-flight and it has already stood the test in numerous German stadiums such as at VfB Stuttgart, Eintracht Frankfurt, Fortuna Düsseldorf and many more.