SLT Canister is a beautiful lightweight 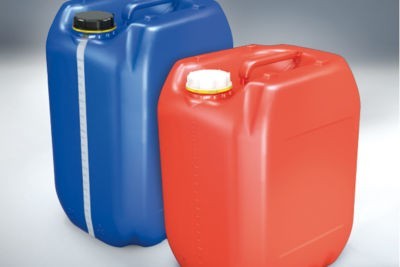 With the SLT Canister, the FRIES Kunststofftechnik GmbH situated in Sulz developed an innovative packaging solution that is very light, but extremely stable.

Sulz, 29.4.2019 – With the SLT Canister, the FRIES Kunststofftechnik GmbH situated in Sulz/Vorarlberg (Austria) has brought an innovative packaging solution on to the market that has an unprecedented level of stability despite low material consumption.

Stable – light – tangential, in short SLT
It was a tricky task that the technicians took on at the FRIES Kunststofftechnik GmbH situated in Sulz/Vorarlberg (Austria). The task was: how is it possible to slim down the canister in the material used and weight without losing any stability.
The answer followed in the form of three words. Stable – light – tangential, in short SLT! Combined with stacking knobs, this was a milestone in the product development at the FRIES Kunststofftechnik GmbH.

Dangerous goods class: X-approval
The technicians that were able to chalk up this success counted on an innovative construction. They placed technology and functionality in the foreground. This made it possible to save materials by 100 to 200 grams per canister in all six sizes. With a weight of just 700 grams, the SLT Canisters are no heavier than a juicy dry aged Porterhouse steak. Highly hazardous substances can also be transported thanks to the use of high-quality polyethylene. The examination for leaks as well as the guidelines for transportation were all fulfilled. With the X-approval, the SLT Canisters receive a very high UN hazardous substance approval.

Fancy in shape and design
The canisters are attractive as well. Beautiful curves ad colors such as blue and natural make the container look appealing. “Our idea to flatten the corners and arrange them tangentially is complaint with the design,” explains Gerhard Marte, managing director of technology and operation at FRIES Kunststofftechnik GmbH. The SLT Canister has a fancy look together with the optimized anti-elephant feet. A tip: identification, such as in the form of an engraved company logo, can be done during production.

Economical and ecological benefits
The high tech family-run company from Vorarlberg specializes in plastic technology. The weight reduction, also known as lightweighting, was done due to both economical and ecological reasons. Even the smallest reduction in plastic quantities can significantly reduce the environmental impact. This does not just mean a more efficient use of valuable resources, but rather also lower CO2 emission per canister. Over the past ten years, the packaging industry was able to reduce the packaging weight by a total of 28 percent thanks to new ideas and innovative solutions.

Stackable and space-saving
The new SLT Canister is also stackable and space-saving. “The rectangular stacking nobs on the top of the canister have a similar effect to a plug connection,” Gerhard Marte compares and points at the indentation on the bottom of the canister. The head of technology is particularly proud of the seal placed on the front edge of teh canister. “The canister can be emptied completely even in an inclined position,” Marte demonstrates and emphasizes the ecological benefits that result from this. “Recycling can be done in regular plastic waste. Nothing is left behind that would have to be disposed of as special waste.”