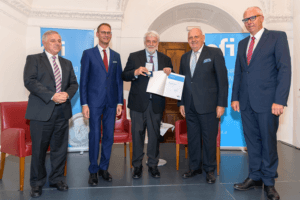 KR Ing. Thomas Rhomberg, former Managing Director under commercial law for FRIES Kunststofftechnik GmbH, received the H.F. Mark Medal from the OFI – Austrian Research Institute for Chemistry and Technology, on 10/3/19. It was awarded as part of a ceremony in the oratorium of the Austrian National Library in Vienna.

The H.F. Mark medal is awarded annually in honor of Austrian-American chemist Hermann Franz Mark. Its recipients are accredited with special endeavors in polymer science.

This prestigious distinction was awarded to Ing. Thomas Rhomberg due to his great commitment and tireless scientific endeavors in the field of polymers. Mr. Rhomberg has also contributed his well-founded expertise in plastics and their processing to various specialist groups in Europe.

Latest From Our Blog