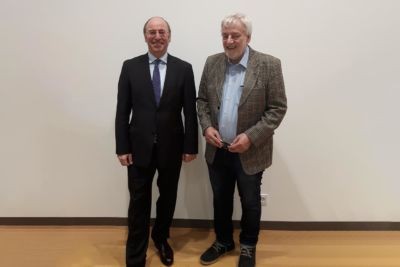 In the image: from left Dr. Johann Pummer (trade association from the Chemical Industry in Austria), Mr. Thomas Rhomberg

Thomas Rhomberg, managing director under trade law, is nominated for the awarding of the H.F. Mark Medal in 2019 and will receive this award in the oratorio at the Vienna Imperial Palace. The H.F. Mark Medal is one of the highest awards in the field of polymer sciences. This brings the scientific aspect of processing in the plastic industry in the foreground once again. With his extensive techincal knowledge of plastics and their processing, Thomas Rhomberg has influenced countless product as well as material and procedural innovations. Through his great dedication and his tireless scientific activities in the polymers sector, he was able to share his knowledge and know-how in different expert groups throughout Europe. Thomas Rhomberg is also a holder of the Ernst Schmitz Prize (TGM) and received the silver badge of honor (ÖNORM).